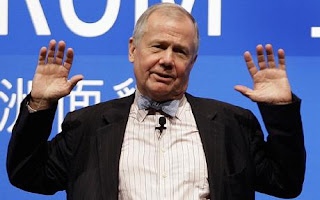 Jim Rogers, the market sage, has warned the global economy is just two years away from another recession, but remains ill-prepared to cope with the after-effects.

Mr Rogers, the respected currency trader and hedge fund pioneer, cautioned that when the downturn takes hold “the world is going to be in worse shape because the world has shot all its bullets.”

Speaking in an interview with business television channel CNBC, the septuagenarian investor said that “since the beginning of time” there has been a recession every four-to-six years, and that’s mean another one is due around 2012.

However, he said that due to the extraordinary measures already adopted by central banks and governments around the world, the arsenal of available tools to combat the next recession is somewhat lacking.

With reference to Ben Bernanke, chairman of the US Federal Reserve, he said: “Is Mr Bernanke going to print more money than he already has? No, the world would run out of trees.”

Meanwhile, Robert Shiller, co-creator of the Standard & Poor’s/Case-Shiller house price index, warned that the next downturn may come even sooner.

“For me a double-dip is another recession before we’ve healed from this recession. The probability of that kind of double-dip is more than 50pc. I actually expect it,” he said. His prediction came despite the S&P/Case-Shiller index for May showing a 4.6pc year-on-year increase in house prices in 20 major US conurbations.